The champion of student tenor saxophones. If you're looking to move to the tenor, this is your gig.

Everything you need to get started:

Everything in the TS-400 + premium accessories:

Right out of the gate, your instrument is covered by our 1-year Manufacturer Warranty for product defects. To learn more about what is covered under our warranty, please see our Warranty Policy.

If you simply change your mind on the purchase (within 30 days of the delivery date), you can ship it back to us and we'll refund your purchase minus a small restocking fee. Obviously, we need the instrument in new, unused condition and in its original packaging. To initiate a return, please contact us.

Continental US - Free Shipping over $50
Shipping is free inside the continental US on orders over $50. We generally ship UPS Ground, although we sometimes use USPS for some smaller shipments (like parts).

Expedited Shipping
Please go through Checkout with the item in your cart to see shipping rates and estimated delivery times for your location.

Processing Time
Domestic orders usually ship out within a business day. International orders take 2-3 days to process. All of our woodwinds get checked and adjusted by a technician before they ship out, so sometimes there may be a slight delay on those orders.

Where does it ship from?
Everything ships from our Miami, FL warehouse.

Learn or re-learn with ease

With our ergonomic key layout, you'll be playing without any effort. Especially easy to play for beginners, this is the ideal sax for anyone just getting started.

We play-test and set up every single saxophone we ship from our Miami, FL HQ. So, your sax is ready to play, right out of the box.

No added cost for setup or anything like that. Just you and your saxophone ready to be enjoyed.

Because looking good is important too.

I’ve been looking at tenor saxophones for a while no glad I came across the Jean Paul TS-400. It is a great sounding instrument at a very reasonable price. If you have shopped for these instruments you will find used models cost nearly as much and you will likely deal with rep adding, corking and adjustments. Why take the risk when such a great instrument is available.

R
Romanos I.
Above and beyond—A+ product, A+ support

Background: We wanted to buy a sax for our son —replacing the Yamaha we had been renting from school —but quickly realized how expensive and overwhelming the whole process could be.
I knew enough not to steer clear of many of the ultra-cheap, “disposable” saxes found on Amazon and in many of the big-box retailers but I also didn’t have thousands to throw around at will.

I read all the reviews, watched the videos, got advice from his teachers and local service techs and endured many failed attempts at finding something among the various auction/resale sites.

By the time I learned about Jean Paul I was skeptical (to say the least) but I was running out of time. I decided to just pull the trigger and I couldn’t be more grateful for doing so.

First of all, the sax itself—by all accounts so far—is incredible in terms of build quality, feel, sound, etc.

I’m not talking about “good for the price.” This is flat-out a great saxophone that does nothing to stand in the way of anything anyone at any level would throw at it. Full stop.

More to the point, I was buying this for my son, still a student. And though he’s very passionate and committed to playing he’s (like any student) just as easily discouraged as encouraged by the tools he’s given.
So, whatever I got him had to be durable, reliable, easy to maintain/fix. It also had to encourage good technique, be easy to play, capable of growing with him (rather than be an obstacle to his growth)…without maxing out my credit card and, of course, look “awesome.”

Jean Paul checked all these boxes and more.

Beyond the sax itself, however, what impressed us the most were the people behind the product.

At EVERY step of the process and through multiple challenges, we received the level of support I’ve only ever heard of old-timers bragging about “back in the day.”
It became very clear, very quickly, that these folks are more “family” than “company” and proud of what they’re doing. They give a crap about what they’re selling and the people they’re selling it to.

Tim, Carlos, Mario —the whole Jean Paul team—went above and beyond to stay in touch (personal calls, zoom meetings, emails, videos) and address any concern.
Over the holidays no less—while filling countless orders and trying to be with family themselves.

I’m just one guy, buying one sax for one kid but the Jean Paul team understood just how much it meant to us and made us feel like we were their only customer.

We’re team Jean Paul all the way now and letting everyone know it.
God knows if my son will ever picks up a “Yama-Markisawa Pro VI” or whatever’s argued to be the “rarest/bestest/most-expensive” sax years from now but I’m sure he’ll still be playing (and loving) this sax.
Whatever you’re looking for, whatever your criteria, if it’s something sold on this website—go for it. You’ll be grateful you did—they’ll make sure of it.

Ordered with two-day air delivery on a Tuesday and horn arrived as expected on the following Thursday. This sax was setup very well and plays great right out of the case. I've played Alto for over 50 years and always wanted a Tenor, but it had to be a quality instrument at an affordable price. This is the one! Love it! 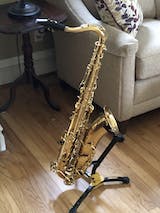 The sound on the tenor sax is wonderful and the customer service is terrific! We had a little problem with a damaged part but it was resolved immediately and we plan to order an alto next. 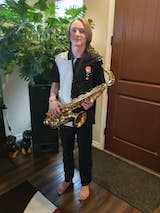 Why buy from Jean Paul?

$1,500 for a student horn? Not anymore. High quality instruments at radically lower prices. That's our promise.

Our instruments punch way above their weight belts. As you grow, you can expect your instrument to grow with you.

If you ever run into any issues with your instrument, our Customer Support team is just an email away.